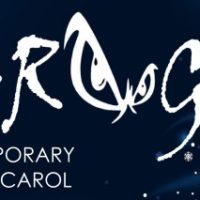 From beginning to end, the dance show itself, the process of practise, rehearsal and even ending up waking myself up literally dancing in my sleep, will always be one of my most beautiful and treasured memories.

The first dance show I’ve ever been in and after only ten months dancing, I really don’t think I let the gravity of it speak to me until the night I got home after it was all over. And it was all over in a heartbeat, far too quickly.

We began learning a new at the beginning of term in September and I remember loving the music and the opening steps immediately, even it for some reason my body was utterly determined to spin the wrong way for some inexplicable reason!
Spin conquered, not before various arguments with my living room furniture a few weeks into term we were asked if we’d like to be in the Christmas Show. Well, I think my face just did one of those uncontrollable, fixed smiles that comes from somewhere that your inner child hides!

Beyond destroying furniture, or more usually it winning, I was so determined to get the routine the best I possibly could, any opportunity that presented itself became irresistible! Even as the gym would be emptying out at the end of fencing this was too much of a tempting practise space! Many confused expressions I’m sure!

Rehearsal day arrived so quickly and walking into the hall where usually only our group dances to find it absolutely packed was pretty exciting and yes, just a bit nerve-wracking! With a smaller space to dance than normal my biggest fear was kicking my friend in the face! Fortunately for her that didn’t happen . . . (this time!)

I had butterflies from the moment I woke up the morning of the show and literally jumped out of bed – my inner child in her element! Arriving at the theatre I hadn’t considered steps or dark corridors or tripping over props, wires, doorways etc. As my friend helped me count the steps in the theatre as we waited to be called back stage, the realisation hit me; “wow I really can’t see at all in the dark anymore! Oh well, torch next time!”

This set me thinking after the show. Everyone was so lovely, I felt so looked-after and no different to anyone else there and it all just happened totally naturally. I am aware in modern society that it seems it can be awkward on both sides of the ‘eye-sight thing’, but I always hope that because I’m as open and humorous as I am about it that it breaks any potential ice and I’ve always made this my ‘thing’. To me it’s not a ‘disability’, never has or will be. Whatever ‘it’ may be, to me it’s just a different level of ability at certain things; some people are great with numbers (I’m utterly rubbish at that!) some people have good balance or have blue eyes! I don’t believe it’s as simple as ‘boxing it’ because that’s what makes someone appear ‘different’, just be you, always. Dance, amongst other things has really opened my mind to this again recently, as by its nature it allows for the freedom of thought and movement; such an inspiring journey in such a small space of time.

Rehearsal over so quickly and no disasters, then a while to wait before the show, which felt like forever! So between coffee and of course the superstitious dark chocolate we crammed in as much practise as possible in the packed dressing room with every other group doing every other kind of dance at the same time; such as buzz it was tangible and fantastic!

Show time! The most awesome wave of adrenaline which always seems to start in my knees sent an instant grin to my face! The dance itself was like nothing I’ve ever experienced. Nothing like playing on stage, this was a whole other performance. I remember not being able to feel the floor under my feet, like I was strangely floating and even though connected by the music as a group and by maintaining synchronicity I experienced a wonderful feeling of individuality at the same time almost in an away-with-the-faeries way. And it was over!

Happily there was no falling-off-the-stage but I did have a very intimate moment with the curtain as I came off which both me and everyone in the wings found completely hysterical! It’s a shame that didn’t make it into the video! I just didn’t want to go home and when I did, I carried on dancing! Definitely a memory for life and thank you so much Cornwall Dance School for the most incredible year and magical journey.