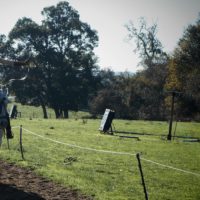 To be given an opportunity to actually ‘live’ life-long dreams has a gravity which is overwhelming.

Making the initial contact was as challenging in many ways as the goals themselves in that I was uncertain and anxious that I may have finally exceeded the limits of my vision. So having a ‘yes’ to both queries meant the world.

With just over seven years of modern fencing experience in Foil and a love since childhood for most anything and everything sword-related, to be able to finally have lessons in an older more original style of fencing was a complete joy! And with albeit replica but ‘real’ swords!
With my historical interests being mainly and passionately focused on the Viking and Medieval eras I was most keen to learn techniques in sword and buckler/shield.

Having just had my second lesson I’m completely enamoured and lesson time just melts. This style for me personally calls on muscle memories not just from fencing Foil but from dance and even riding wonderfully tying so much of what I do and have done together and reinforcing it all.

Bar the obvious challenges with ‘fencing distance’ which are tough enough for any fencer initially regardless of how they see, it seems so far that what I can see is happily going to present no more of an obstacle than in any other area of my life.

The last time I had any kind of archery experience I was around nine or ten so twenty odd years on I wondered if I’d have any chance of still seeing even the target outline and just to make things easier – whilst moving on horseback!?

The irony in learning and using this type of archery is that nearly all of it relies on muscle memory and sense of touch. Nocking an arrow using this technique is even referred to as ‘blind nocking’. Unlike ground archery, if you’re riding at speed as well as looking for a target and where you and your horse are going, you simply don’t have the luxury of looking at the bow string, your hands or the arrows, so everything has to be learned by touch. In some ways I wondered if this could ironically give me an advantage as so much of how I ‘see’ is in exactly this way. In our initial lesson on the ground, it was suggested to us to “close our eyes if it helped” . . . I did have an involuntary sneaky giggle! And later in conversation my most favourite quote in a long time: “the novelty of suggesting to someone blind they ‘close their eyes if it helps’ will take a long time to wear off!” Love it!

At the distance we were shooting which was around seven metres from the target, I was relieved that I was able to at least make out the white outline around the edge giving me half a chance of hitting it, although the colours of the rings weren’t visible to me.
However, as we learned, aiming for the rings themselves when on horseback and at speed is of far less importance than actually hitting the target itself. There simply isn’t time to think about points and rings with seconds to nock and release the arrow and immediately nock another.

In conversation at the end of the course, it was genuinely moving to be told that in terms of my ability I really was no different to anyone else there. Perhaps my increased reliance on ‘seeing’ with muscles more and more over the years in most everything I do can even the balance as actually seeing becomes less effective.

The impact both these I hope new beginnings have had on me in respect of self-confidence and belief, let alone the gravity of the realisation of life-time dreams is barely possible to capture in words. I’m left blissfully awe-struck with a true need to learn as much as I’m able, to be as good as I can be and to go and do more as often as circumstance allows. And as always to continue to manipulate the limits of what my vision allows to its extremes.

Experiences which compel you to reach and exceed your absolute limits on every level can enrich and influence all aspects of your life in the most wonderfully unforeseen, addictive and productive ways.

Thank you just doesn’t at all seem enough Dave, Karl and Zana, but it is honestly completely heartfelt.