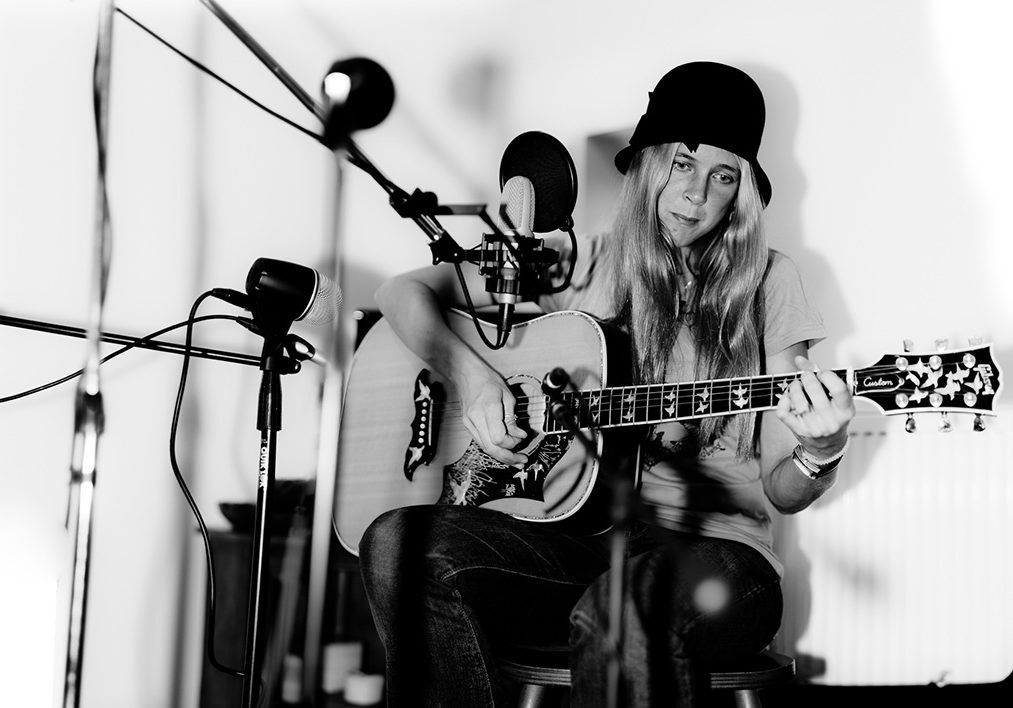 The earliest memories I have are music-saturated! By association, everything ‘happy’ was rooted and connected to music. Perhaps the limitations of eyesight were one reason which gave music greater impact and gravity. It was and still is pure and complete escapism to me, solace even. A world I could understand emotionally and creatively where hearing rather than seeing was most important. A glorious disconnection at times from as for everyone, a painful reality especially during my late teens.
I began learning piano and reading music at the age of 4, but it wasn’t until I was 12 or 13 I unearthed and my true love and began playing guitar. In the following 13 years I completed all the grades and eventually, because of life ‘getting in the way’ I got Grade 8 classical guitar at 25.

My influences are diverse and eclectic to say the least. From childhood my music ‘education’ began mostly through my Mum in the car on the way to and from school. I was pretty much word perfect on countless Neil Diamond songs, as well as Bridge Over Troubled Water, Graceland, Rumours and Mirage by age of 5 or 6. I’d say this was where my initial grounding in particularly rhythm and a need to sing originated.
As a child I also had a deep love of the passion and expression in classical and purely instrumental music and became obsessed by the rag-time piece The Entertainer by Scott Joplin and later the minor movement of Beethoven’s Moonlight Sonata. After begging the school organ teacher, as my piano teacher refused to teach it to me, I’d just about nailed the Entertainer by age 8. By age 9 I’d stopped having lessons but by means of hassling again I’d got the trumpet teacher to help me learn the Beethoven piece.
At home, being the youngest the music my brother listened to also worked its way into my music-conscious. By my early teens I was utterly obsessed with Tom Petty, Bob Dylan, The Byrds, The Police and Fleetwood Mac to name the main, After hearing the ‘Hard Promises’ album at 13 not long after picking up a guitar, when I wasn’t trying to learn the scales and classical stuff for exams, all I would try to play was ‘Insider’. It ended up being the first song I ever learned to sing and play and I still believe Stevie Nicks taught me how to sing! 10 years later it was the first song I played at the first open mic’ I did.

I started writing from age 8 or 9 mostly poetry which by 12 or 13 had morphed into basic songs. Throughout my late teens was the most vivid and varied expansion of influence through friends at college and university and going to as many festivals and concerts as I could get tickets for. Amongst many others; Led Zeppelin, Black Sabbath, Jimi Hendrix and Bob Marely as well as Eva Cassidy and Joni Mitchell where the most pivotal in influence.  I’m not entirely sure which genre I’d fit and honestly I try not to tick boxes. What I write is inspired greatly by personal experience, auto-biographical in the main. Admittedly it’s all more on the ‘uncomfortable’ side of life, as I like to challenge my own ‘comfort zone’ so I guess that comes across.